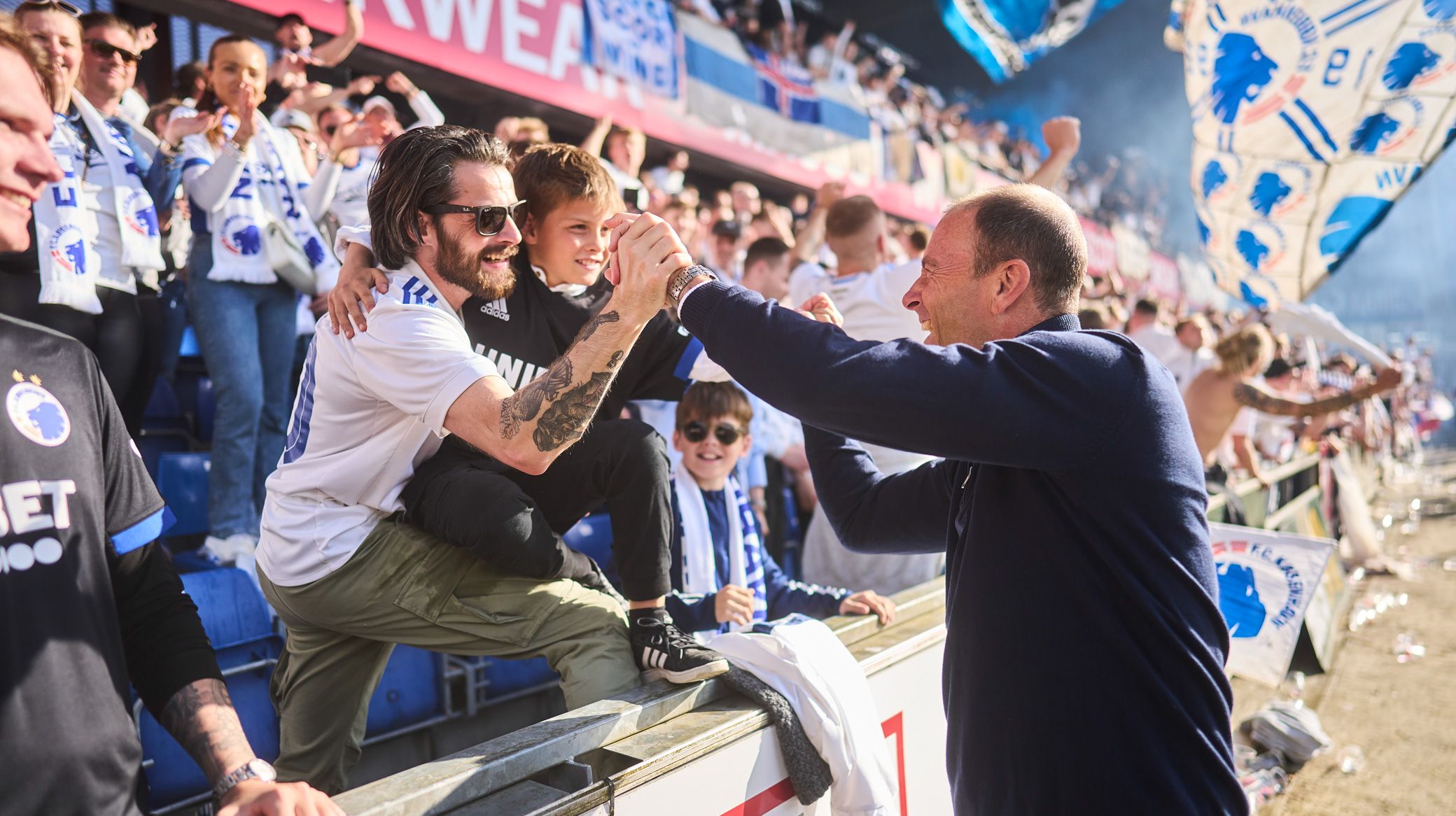 Thorup on the title, fans and Grabara's penalty save

F.C. Copenhagen head coach Jess Thorup insists the celebrations at the end of Sunday's clash with Randers will not be repeated until the team is mathematically sure of winning the Danish Superliga this season.

Goals from Hákon Haraldsson and Khouma Babacar pushed FCK six points ahead of FC Midtjylland heading into the final weekend of the season. FCM still have a game in hand to play – on Monday night – but the Lions' superior goal difference means the title is likely coming back to Parken.

But Thorup insists the team still has work to do in order to get over the line, with a final clash against AaB penned in for Sunday.

"I am happy and proud that we have taken this huge step today, so we are now as close as you can get (to the championship)," says Thorup.

"I'm very impressed with the way the players have handled the pressure right down to the very end. Both the pressure we have put on ourselves and external pressure too.

"It was great to win both on Wednesday and today with the title on a knife edge, and it really shows the quality we have in the squad and what potential we have to build on.

"Therefore, I have told the players they should enjoy it today and are welcome to have a beer in the coach home, but let's just see what happens tomorrow night (between FCM and Silkeborg) before we call ourselves the Danish champions."

"It has been a season with many bumps in the road, not least with the amount of injured key players we had in the autumn, but the youngsters really stepped in and delivered the goods, so we kept the distance at the top down to two points during the winter break," says Thorup.

"The spring has been fantastic. We are not quite where we would like to be with this team yet, but this is definitely a huge step in the right direction. And if we win the title, which we are now as close to as you can practically be, then it is important to take further steps next season, both in Europe where we may even get into the Champions League group stage, and also defend the Danish championship."

Incredible support from the fans
FCK fans have broken the Superliga record for home attendances this season and Parken will be a sell-out event on Sunday for the welcome of AaB.

And Thorup has a message for the supporters – 2,500 of which were in Randers at the weekend.

"Our fans have been there through thick and thin this season, and a record has been set for our home crowd in Parken, so they have contributed greatly to what we have achieved," says Thorup.

"That is why I am very much looking forward to a full Parken on Sunday, when we will hopefully see the gold medals handed over to the players."

On Kamil Grabara
Thorup also praised goalkeeper Kamil Grabara for his penalty save on Sunday when the Lions were 1-0 up midway through the second half.

"The first quarter of the match we were shaky, but once we got a good grip on the game we created plenty of chances," says Thorup. "Hákon scored a fantastic goal that sent us on the path to victory, but of course you can only imagine how it could have ended had Kamil had not saved the penalty kick.

"I have never doubted his qualities, but he has really taken some big steps this season and had a huge impact on the strong defence that has characterised us. So the save today was just the tip of the iceberg of a great season for him.

"We got the victory we came for, and which I also think we deserved it."