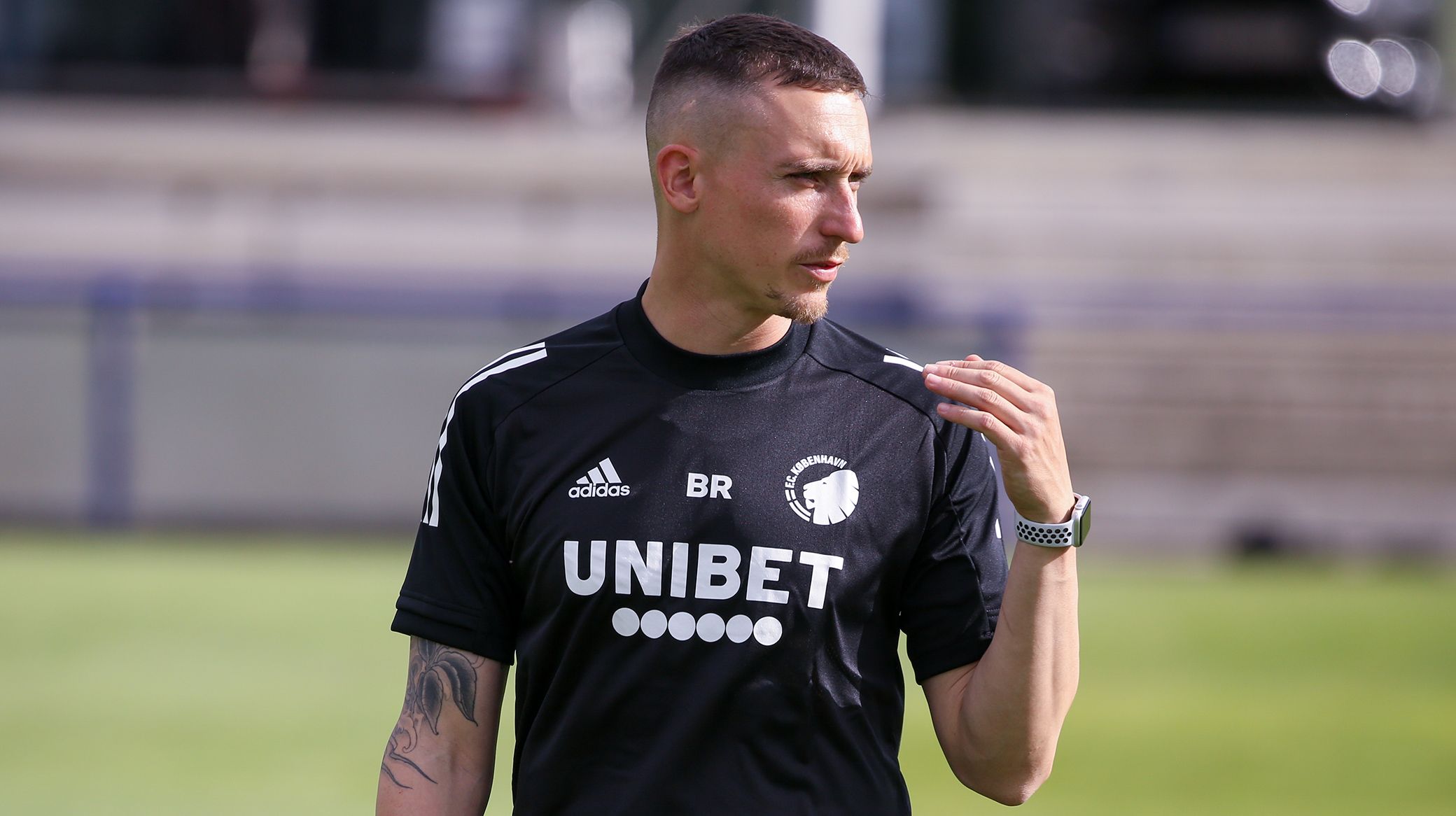 F.C. Copenhagen's fitness coach Ben Rosen welcomed back the players over the weekend following a few weeks off during the winter break – and he's already working on building back the squad's fitness ahead of the spring half of the season.

FCK headed into the Christmas period second in the Danish Superliga and having qualified for the UEFA Europa Conference League knockout stage.

Danish football's domestic calendar has a short summer pre-season and a longer winter hiatus, with the second half of the Superliga campaign beginning in mid February.

It means Rosen and the FCK coaching staff have six weeks to get the players fit for the home tie with OB on Sunday, 20 February.

And FCK.dk has spoken to Rosen about what he has in store for the squad.

"The players have just come back after the winter holidays, yet our preparations began as soon as our last game ended (in December)," says Rosen.

"Yes, we ended 2021 at home against Slovan, and in the first four or five days of the winter break the players were completely free, but then they began on their individual programmes that we had made for them.

"The programmes were adapted to their physical condition in relation to damage and stress and so on, and they generally consisted of running and some strength training, but nothing with the ball.

"The programmes have had players running for the last three or four weeks, and Saturday they were all together for the first time at Number 10, to do a very light workout just to get the body going, and so the work begins in earnest on Monday.

The way the fixtures fell means FCK ended the domestic season earlier than usual, and will pick up their fixtures towards the end of February.

Asked if this means the team has more time to prepare for the season run-in, Rosen says: "Yes, it is a slightly longer winter break than in the past, and we also considered when we should start the new year.

"We could have waited until the middle of next week, or next Monday, but we believed that it was best to start now as it is almost a month since we played our last game.

"We also need to be extra cautious with respect to the Covid situation and reduce the risk of infection as much as possible, so we've adjusted some things in relation to keeping distance when we are indoors and so on."

FCK plan to head to Portugal in early February for the squad's annual winter training camp. Asked if there is a Plan B should Covid prevent the team from travelling, Rosen says: "Yes, but it's for me (to dictate), there are others who take care of that.

"It also does not change our physical training plans, although of course it's better to train in warmer conditions and on better pitches than at home. But we must look at that when the time comes."

So, between now and that decision, what is in store for the players at home in the depths of the Danish winter?

"We start with two hard days when we run a double programme of outdoor training in the morning, and weight training in the afternoon, and then a slightly easier day when the body can recover," says Rosen.

"We try to generally plan the training in blocks of about five days, as we finish with a game, either an internal match or a friendly."

"At the training camp we will, in principle, carry on the same pattern, where the plan is to play a match on 5 February and again on 10 and 11 February.

"We conclude with matches over two consecutive days, where we will play with two different teams. It is important over the winter break that everybody gets enough game time in their legs, and at this point all are likely to play 90 minutes. And then when we get home from Portugal on the 12th, it's only a week until the game with OB."

Will the first training matches feature two different teams in the two halves, as usual?

"Yes, exactly, most will play only 45 minutes, and then we increase it slowly, the longer we get into the winter. The same applies to the intensity of training, which increases as we go along.

"Of course there is much focus on the physical aspect at first, but we train with the ball as early as Monday. There are also exercises without the ball, but generally we work a lot with the ball, so we develop the players as footballers rather than just as athletes.

"And combined with the work the players have done during the winter holidays, they shouldn't have lost too much, so we don't need too long to get them back into shape."

Injuries impacted the FCK squad during the first half of the season, so much so that 12 players were out of action in the final Conference League group game against Slovan Bratislava in December.

Asked if injuries impact on the winter training plans, Rosen said: "Not really. There are some who are not yet ready to train with the squad on Monday, such as Boilesen and Ankersen, who underwent surgery in early December.

"We always analyse any injuries carefully, but there is a general pattern of injury types. For example, if we had four or five hamstring injuries, we might plan something and adjust the training, but injuries have hit us for many different reasons. We've also had injuries to players who feature in many matches, as much as players who have played only a few matches, so there is also no pattern here.

"But no matter how many injuries we have, we work every day to optimise everything we do, so we can best prevent and avoid injuries. We monitor each player every day and plan how to individualise a joint training session to suit an individual player.

"The planning of the training sessions is a big puzzle to get it all to fit best together, and we spend many hours on it throughout the year."