Ragnar Sigurdsson has signed a deal with F.C Copenhagen until the summer of 2020.

The Icelandic defender returns to Copenhagen after six years in Russian and English football.

He first joined FCK in the summer of 2011 and soon established himself in central defence, and after 102 games - including winning the Danish championship and playing in the Champions League group stage in 2013 - he was sold to FC Krasnodar in January 2014.

Later he played for Fulham FC, Rubin Kazan and most recently FC Rostov, where he was captain until he ended his stay in December 2019.

"He was a distinct individual during his first stay at FCK with his power and winning mentality, and we know that he is really eager to play in Copenhagen again. And he knows how we play, he knows the club, and we know him.

"We wanted to ensure enough competition and width in our defensive ranks, where we have been a little vulnerable in terms of number of players.

"We have signed a contract until the summer, and then we will talk with Ragnar about the future. He turns 34 this summer, but he still has the physique to play at a high level, and we look forward to having him in the club again.”

It is also special for Ragnar Sigurdsson to wear the FCK jersey again.

"I have always felt that FCK was my club, and Copenhagen became my home, when I was here the first time, so it feels like coming home,” he said.

"I really enjoyed my first stay here, and I've still got a lot of friends in the city, and I've always felt respected and supported by the fans. I really appreciate that, and I'm very much looking forward to seeing them again.

"The length of the contract is not important, my only ambition is to do all that I can to help FCK win the title and perform well in Europe.

"I am looking forward to meeting many of the people I already know and also to meet a lot of new teammates.”

Sigurdsson will wear shirt no. 27 for the remainder of the campaign. 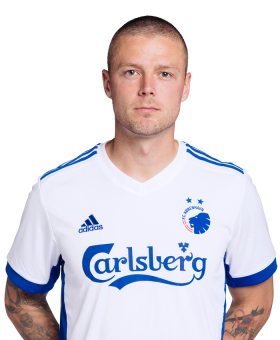