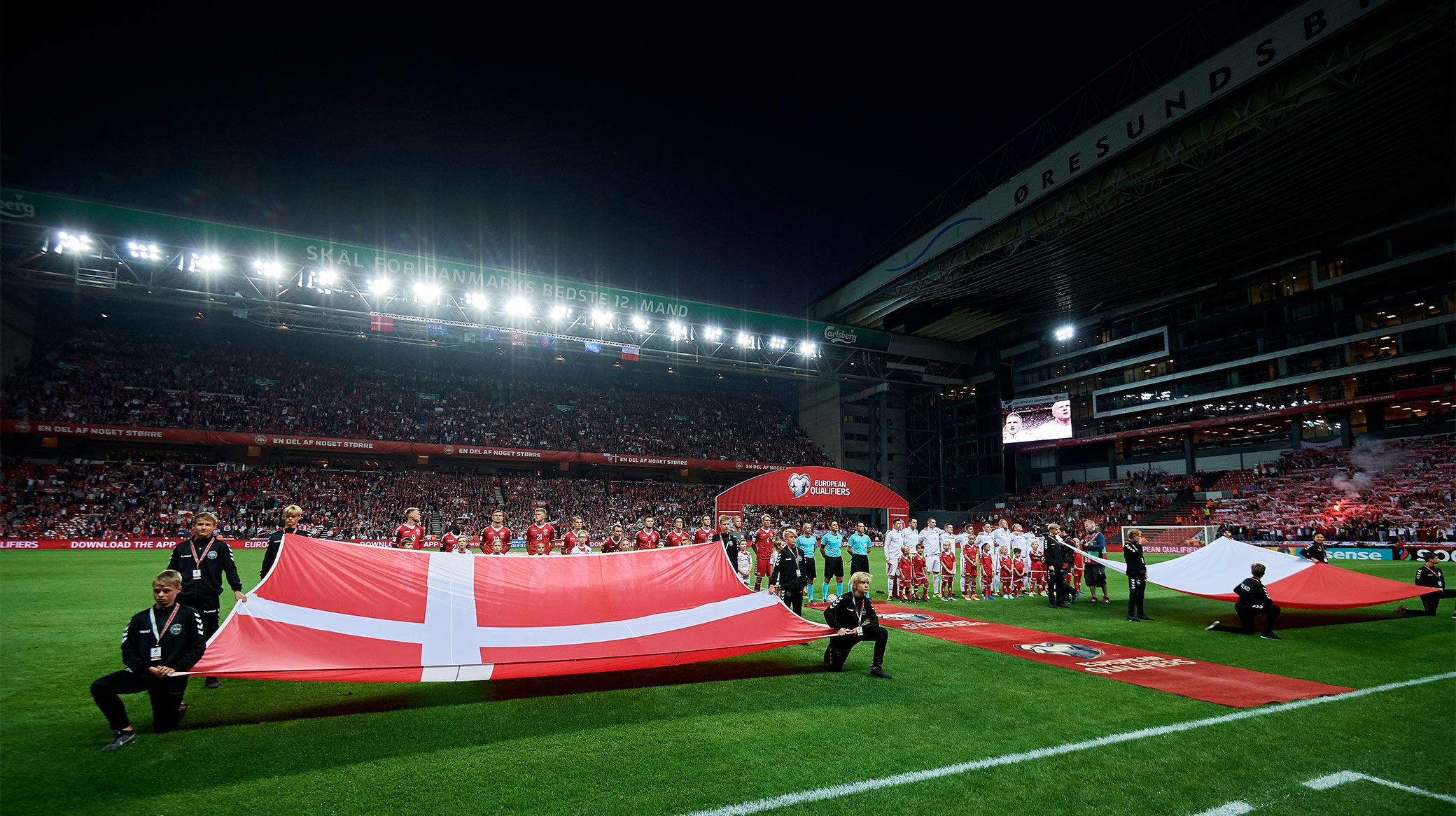 Most matches during the next cycle of Denmark home fixtures will be played in Telia Parken, with for to five games being played elsewhere in the country.

From the autumn of 2020 to the New Year of 2022 the men's team will play first in the UEFA Nations League and then FIFA World Cup qualifiers, before another round of Nations League fixtures.

That is why DBU has agreed with Parken Sport & Entertainment that at least seven to eight home matches during this period must be played in Telia Parken, which was sold out for the exciting 1-0 win over Switzerland recently.

Telia Parken initiatives
Over the past year, a lot of new initiatives have been created for fans at home matches, including the atmosphere of the Red Wall, new activities in the fan zone and additional entertainment both before and during matches.

The remaining two to three matches in the World Cup qualification and Nations League can be played at other stadiums. In addition to qualifying and Nations League matches, there is the possibility of holding two to four friendlies during the period. The allocation of these matches will be decided later.

The new agreement comes after an open tender, in which DBU invited all stadiums to be home for the men's national team in the period from summer 2020 to December 31, 2022.

The DBU received several offers and made the decision after an overall assessment of spectator capacity, facilities for fans, partners and financial frameworks.

Overall, Parken Sport & Entertainment has made the best offer, where among other things, much greater clarity has been achieved, explains Kenneth Reeh, Acting CEO of DBU.

"Telia Park creates a fantastic setting for the men's international matches with up to 37,000 fans, and we are very much looking forward to a minimum of seven to eight matches in there," he said.

"At the same time, it is good that during the same period we can play matches elsewhere, so that fans from all over the country will have a close relationship with the entire Denmark men's team.

"We are very pleased that the men's team can play in front of fans at various stadiums in the country for exciting matches in the Nations League, World Cup qualification and friendly matches."

Simon Kjær also looks forward to several matches in Telia Parken, where players have had great experiences with the Danish fans in recent years.

"It's an absolutely great feeling and a very special atmosphere when it's sold out at Telia Parken, so we're looking forward to playing more great matches there," Kjær said.

"But it is also nice that with the new agreement we get the opportunity to play elsewhere in the country, so we can meet our fans throughout the country, just as we have recently done when we played in both Aalborg and Aarhus."

Parken Sport & Entertainment is also delighted with the new agreement, where the men's team can continue to attract many thousands of fans for the big matches.

"We have always been very proud to host the top Danish national sides and we look forward to continuing the more than 100-year-old tradition of international matches at Telia Parken in Copenhagen," says Bo Rygaard, chairman of Parken Sport & Entertainment.

"In cooperation, we have made a good and flexible agreement for Danish football and not least for the Danish national team's fans.

"We also have a clear intention to further strengthen the relationship and see this as the next step in a long cooperation between us and the DBU."

The men's team has sold out home matches against Ireland and Switzerland in the Telia Parken this year and has recorded high satisfaction scores from fans at the stadium.

The match against Georgia in June had well over 16,000 spectators and also a very high satisfaction among the fans in attendance. For the friendly against Luxembourg in Aalborg, there were 9,000 spectators - and between 500 and 1,000 attended open training and autograph signing the day before the match.

The distribution of national matches will only take place after the draw for the Nations League and World Cup qualification in the spring. After that, a decision will also be made on the placement of international matches away from Telia Parken.